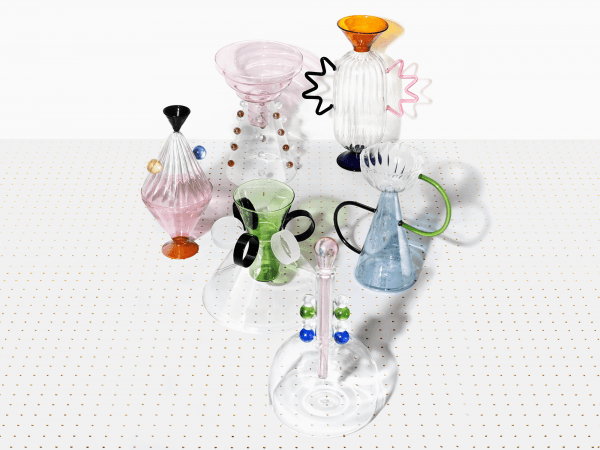 Arabesque is a collection of vases in borosilicate glass that takes its name from one of the most famous figures of the ballet, in which one leg is ‘en air’ backward and the arms are stretched in opposite directions: a geometrically clean position, reproducible with a few lines. The shapes of these vases refer to the costumes of the Triadic Ballet, in its volumes and colors.

For the Bauhaus 100thanniversary, Serena Confalonieri presents an installation inspired by two important, though less well known, disciplines developed in the German school. The first refers to the dance, in particular to the Triadisches Ballet (Triadic Ballet) invented and developed by Oskar Schlemmer in the 1920s, a three-part work punctuated by three colors (yellow, pink and black) and defined by three geometric shapes (circle, triangle, and square). The volumes of the costumes stand out, inspired by the shapes of the Bauhaus and deliberately very bulky, so as to limit the movements of the dancers themselves and create a new style, characterized by a formal elegance even in the movements.